Dreams often bring us totems and the totems bear gifts. These gifts can come in the form of initiations. They provide inspiration for our writing and our souls as we endeavor to apply the teachings to our daily lives.

Totem: (in some societies, especially among North American Indians) an object, species of animal or plant, or natural phenomenon symbolizing a clan, family, etc, often having ritual associations 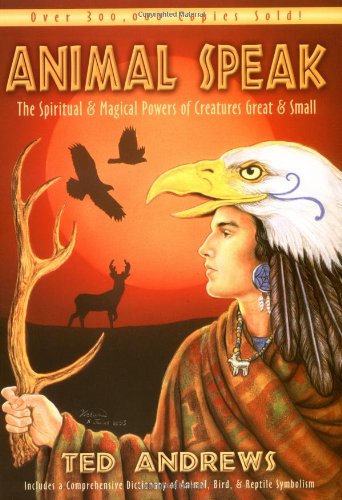 Over a period of years, animal totems frequented my dreams, cougar, bear, and eagle being prevalent. I look at my dreams symbolically and metaphorically. (see: what is the difference?) The symbol system is my own, derived from years of working with my dreams while also checking reference books such as Animal Speak: The Spiritual & Magical Powers of Creatures Great & Small by Ted Andrews and The Books of Symbols: Reflections on Archetypal Images edited by Ami Ronnberg and Kathleen Martin.

When I studied English literature in college, I always assumed an author’s symbols were contrived and was surprised to discover that symbols occurred in my writing without conscious manipulation. Humans think in metaphor and the metaphors we choose, even unconsciously, structure our perceptions and understanding. Here’s an example from theliterarylink.com/metaphors.htm. “Thinking of marriage as a “contract agreement,” for example, leads to one set of expectations, while thinking of it as “team play,” “a negotiated settlement,” “Russian roulette,” “an indissoluble merger,” or “a religious sacrament” will carry different sets of expectations.” When we attribute thoughts to characters in fiction or family members in a memoir, using metaphors they themselves would use deepens the reader’s understanding of their motivations and world view.

Ever since I began studying dreams in the late sixties, I’ve been most interested in what they tell me about the issues in my current life and about the spiritual guidance they carry for me.  In writing, I find that when I drop into the voice of a character, or a relative, the metaphors surface naturally and serve both the writing and my own understanding. There is no need to struggle with “trying,” I can let it emerge.

I’m moving (a wonderful metaphor I won’t explore here!), and moving involves sorting through each piece of paper, each book, each bottle and photo to decide what to keep and what to release. In clearing off a  bulletin board I have near my desk, I discovered a poem written March 18, 1999, on the back of a collage. The poem emerged from contemplating the “message” in the visual imagery. The cougar had appeared in several dreams. The poem still speaks to me as does the image. When I removed the collage from the board, I intended to throw it away, but upon reading the poem, I knew I could not. It had served me for fifteen years; I realized it wasn’t done with me yet. It had more to give.

The cougar roars into then night.

I wait, knowing she’ll come,
seeing me in dreams,
stalking me as prey,
prowling, sniffing,
clawing at my door
until I claim her golden pelt and
go.

The cave is dark and I. with
no cat’s eyes, cannot see
or smell or sense what
is there, next, under my foot.
Power is a moment-to-moment thing,

the energy produced by trust.
Go. (not come and be protected)
Go. Alone. Free. Powerful.
The pelt is torn and scarred.
And it is now mine.
I accept.

The cougar emerged as lions in paintings I did on cabinet doors in a bathroom. Inspired by the art of Henri Rousseau, lion and lioness seek their prey through a thick jungle. Rousseau never visited a jungle and had seen wild animals only in tableaux of taxidermy. We know that lions do not live in jungles, but on savannahs, and that lionesses do most of the hunting. However, dreams and imagination are not faithful reproductions of reality; after all, in a dream we can fly or visit with the dead.

In looking again at the collage, poem, paintings, I hear the final words of William Blake’s poem “The Tyger“:

Tyger Tyger, burning bright,
In the forests of the night;
What immortal hand or eye,
Dare frame thy fearful symmetry?

and hear its question, “How can a benevolent creator create both the ferocity of the tiger and the gentleness of the lamb?” as it applied to myself. How can I hold both anger and love in this one vessel, within this torn and scarred pelt? The truth is that I don’t know, although I know both exist within me. And I also know that from this paradox springs tremendous power, the power that motivates me to hunt through the darkness of the night for what I burns bright within me.

Power is a moment-to-moment thing, the energy produced by trust.

What totems do you carry? What metaphors and symbols appear in your dreams and/or your writing? What gifts of insight have they revealed?

Author of Mary's Way and Women, Writing, and Soul-Making Offers programs in the written word to facilitate women in telling their truth so they can stand in their power and create positive change in their world View all posts by Peggy Tabor Millin